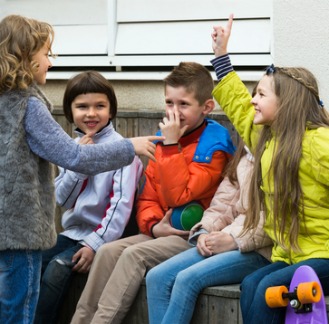 Wrong link?
Go back to all activities Download the PDF for this Activity

Charades is a guessing game for all the family. It's great fun, and it encourages imagination and communication skills. One person thinks of a film, a book or TV show title and, without speaking, acts out the words. The others make guesses about what is being shown.  To start the game, you use a recognised sign to show either:

1) a film title - by pretending you are winding up an old fashioned film camera.

2) a book title - by putting both hands side by side with the palms up, as if reading a book.

3) a TV show title - by making a rectangle shape in front of your eyes.

Next, tell people how many words are in the title, by putting up that number of fingers; and tell them which word you are going to act out. Then it's about finding imaginative ways of communicating the words without speaking.

Have a look at this youtube video from Howcast for some more details on how to play. If you need some ideas for titles of films and books to act out, click on the PDF above right.