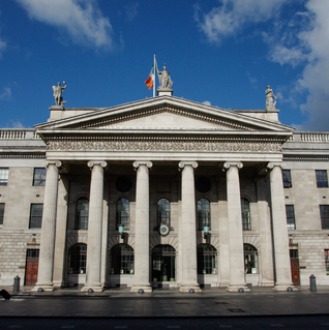 2016 was the hundred year anniversary of the Irish Easter Rising of 1916. Your child might have learned about it in school.

The Rising began on Easter Monday, 24th April 1916 when Irish republicans took over some important buildings in Dublin. Their wish was to end British rule in Ireland and to establish a republic. They laid out their ideas in a Proclamation stating that the new republic would "guarantee religious and civil liberty, equal rights and equal opportunities to all its citizens". The Rising was a failure from a military point of view, but it changed the course of history. Ireland became an independent republic at the end of 1921.

Here are some good online sources that might interest your child:

1) For a 3 minute video giving a brief history of the Easter Rising click here.

2) For Google's interactive journey around 22 locations where fighting happened in Dublin, click here.

3) Here's a fantastic lego version of the Rising made by 3rd class children from Sunday's Well Boys National School in Cork.

4) If your child is interested and would like to read more about the men who signed the Proclamation, look here for short biographies from Ask About Ireland. Use the arrow on the right to get to the next page.