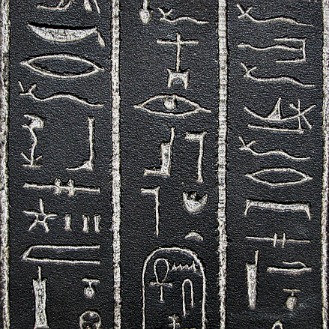 Humans have been writing things down for thousands of years. After all, it's a wonderful way of remembering things, and passing on information and ideas. At first, people made marks on stone or bone, inventing pictures or signs that other people learned to understand. Later, the Egyptians began to write on papyrus, made from a plant. It was much easier to carry around than stone tablets! Paper was only invented in China about 2000 years ago.

Nowadays we write mainly on computers or mobile devices like phones. Don't forget that there are thousands of different written languages in the world today. Search for a few online and have a look together at how different they are - Chinese, Russian, Arabic, Hebrew, Hindi to name just a few. We use the alphabet that was invented by the ancient Romans.