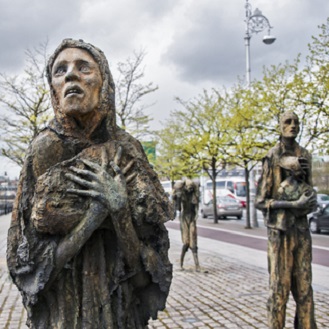 The Irish Famine of the 1840s resulted in the death of 1 million people in Ireland and caused mass emigration. In 1845 the population of Ireland was over 8 million but by 1851 the population had dropped to about 6.5 million. Irish people continued to emigrate up to the 1950s reducing the population even more.

The majority of Irish people were very poor tenant farmers. Their main source of food was the potato. When the potato crop was destroyed by a fungus several years in a row, the people starved. Ireland was then ruled by Britain and the British government did not do enough to help the people of Ireland. For instance, crops of wheat, oats and barley were exported from Ireland instead of being given to the starving. Britain spent £8 million on relief programs in Ireland during the Famine, but it spent £69 million on the Crimean War (1854–56).

If your child would like to read more show them this link from Kidzsearch, or this one from Ask About Ireland. See also a children's book "Under the Hawthorn Tree" by Marita Conlon-McKenna which imagines what it was like to be a child during the Famine. You can get it from your local library which is free to join and use.