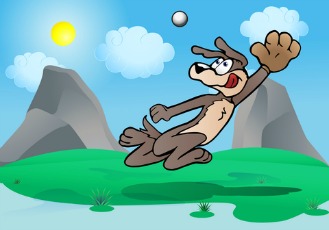 Rounders is a fast-moving team game for outdoors. All you need is a tennis ball, a bat (or a tennis racket), and five items to mark out five bases (jumpers will do) in the form of a rough pentagon - a five-sided shape.

1. Divide the children into two teams. One team will bat and run between the bases; the other team will bowl the ball and try to catch it. Each team takes turns batting and bowling.

2. One person from the team stands at first base with a bat (called the batter). The bowler has to throw the ball (underarm) towards the batter.

3. The batter can have three goes at hitting the ball. Once they hit the ball, they run to first base and further if the ball has not been caught.

5. A second batter starts at first base and, once they have hit the ball, the batting team run to the next base or as far as they can.

6. The objective of the game is to get as many of the batting team home (back to first base) before three people are caught and put out. Then the teams swap roles and try to do the same.

Watch this video to see a game of rounders in progress (turn the sound down).